I have not been one to eat turkey burgers. Turkey is something you really need to season or it can be bland. These turkey burgers are my first that I have tried making at home, and we have added them to our regular menu for months because they are that good. I have had to play around with the chili pepper to figure out the right amount for my husband and I, so you will need to do the same. The difference between chipotle and regular cayenne chili pepper is flavor and the heat. If you choose to use soy sauce instead of coconut aminos, you may need to use less so the burgers are not too salty. Coconut aminos is a great substitute for soy sauce when you do not want to consume soy. Enjoy!

Preheat oven to 400 degrees. Line a baking sheet with parchment paper or foil (grease if using foil). In a large bowl, whisk together all the burger ingredients except the ground turkey until combined. Add the turkey, mix until just combined. Do not over mix to avoid tough burgers.

Divide and shape mixture into four burgers. Place onto the lined baking sheet. Bake for 16 to 18 minutes, then turn oven to broil. Place the burgers under the broiler for 2 to 3 minutes until browned. Remove and let rest for 5 minutes. Combine the mayonnaise and amount of chili pepper. Top burgers with the mayo and any desired toppings like avocados and salsa.

Here is your chance to try chia pudding if you a) have never heard of it or b) didn’t think it sounded/looked appealing. Great for a light breakfast, snack or a desert, this yummy pudding is bursting with strawberries and sweetened with coconut milk and honey. Taking only minutes to prepare, you will have a healthy, delicious option to add to your day. Strawberries, extra honey, mini chocolate chips, or cacao nibs are great as toppings. Enjoy!

Chia seeds are full of important nutrients. They are an excellent source of omega-3 fatty acids, rich in antioxidants, and they provide fiber, iron, calcium, and magnesium. When chia seeds are soaked in a liquid they expand and create a tapioca pudding like texture. 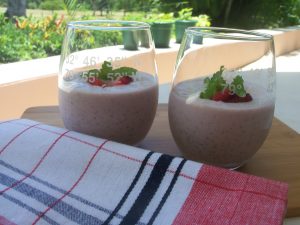 In a blender or food processor, add the strawberries, coconut milk, honey, and vanilla. Blend until strawberries are completely pureed and everything is mixed. Add mixture to a medium bowl along with the chia seeds. Once combined, cover and let rest for at least 4 hours in the refrigerator.

Oh how ooey gooey are these bars! Jessie at justjessieb.com started swapping out not so good for you ingredients for more whole food ingredients, and came up with these ooey gooey, almost sinful almond joy bars. Almond butter makes an amazing batter replacing white flour, and coconut milk replaces condensed milk. The chocolate chips she and I used are Enjoy Life brand. These are very simple and quick to prepare, and will be gone in a flash. Enjoy! 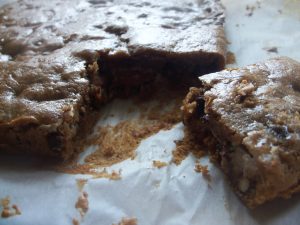 Preheat oven to 375 degrees. Line a 8 x 8″ baking dish with parchment paper and set aside. In a mixing bowl, combine the almond butter, maple syrup, eggs, baking soda, vanilla and salt until smooth. Pour roughly 2/3 of the batter into the baking dish. Evenly layer the following one at a time: 1/2 cup chocolate chips, 1/3 cup shredded coconut, 1/4 cup almonds. Top with coconut milk, and a final layer of the remaining chocolate chips. Drizzle the remaining batter over top ( it is okay that you will see some filling ingredients peeking through). Bake for 25 minutes, or until the top looks light golden brown. Remove from oven and let cool for 10 minutes.

French onion soup was one of my sister’s favorite, so I know she would have loved this dish. French onion soup with a boneless pork chop nestled in the broth with onions topped with melted swiss or Gruyère cheese. This would be just as delicious with chicken breast if you choose not to eat pork. Serve this amazing entrée over white rice or cauliflower rice and wow your family with its incredible flavors. Enjoy! 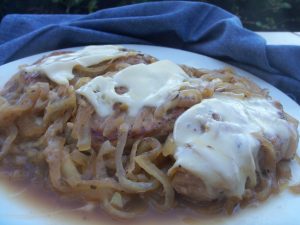 Brush the Dijon mustard evenly on both sides of the pork chops. Season each chop, on both sides with salt and pepper. Add 1 tablespoon of oil to a large skillet over medium/high heat and brown the chops on both sides, (approximately 2-3 minutes per side). Remove the browned chops to a plate and keep warm.

In the same skillet add the remaining 1 tablespoon of oil, the butter, and the sliced onions, stirring well to coat the onions in the oil. Add 1 teaspoon salt and 1/2 teaspoon black pepper. Cook the onions, stirring only occasionally, until they’re golden brown and caramelized. This should take at least 15 minutes over medium/high heat. Add the wine, stock, and fresh thyme to the onions, making sure to scrape up the browned bits from the bottom of the pan. Cook an additional 2-3 minutes after the addition of the wine and stock, stirring frequently. Reduce the heat to medium and add the chops back into the skillet along with the onions. Cover the skillet and cook for approximately 20-25 minutes, or until the chops are no longer pink in the center.

Remove the cover and add the shredded cheese to the top of each chop. Return the cover to the skillet. Turn off the heat, and allow the cheese to melt. Serve the chops on a bed of caramelized onions.

Great for any party, this BLT dip is simple to prepare, and full of flavor. A cream cheese base with spices of onion powder, minced garlic, smoked paprika, and crumbled bacon throughout topped with lettuce, tomato and more bacon. Veggies are great dippers, but your favorite cracker would be delicious also. Since I don’t have all of my dishes here on the island with me and didn’t have a deep dish pie plate, this serving platter worked perfect. Enjoy! 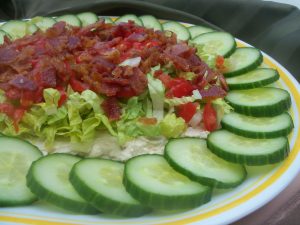 Combine 1/3 of the bacon with the cream cheese, mayonnaise, sour cream, cheese, and seasonings. Place in a deep dish pie plate. Sprinkle the lettuce, tomatoes, and the rest of the bacon over the spread. Serve with fresh veggies to dip.

Ok, I know that these sour cream biscuits are not going to replace a soft buttermilk biscuit, but they are great for allowing you to have a warm soft delicious biscuit more often without the guilt of too many carbs. A bonus is how quick and simple it is to prepare, bake, and have these ready to serve for you and your family at any meal. If almond and coconut flour are new to you, this is a great recipe to test them out. Enjoy! 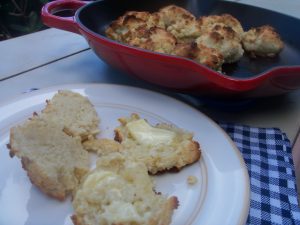 Preheat oven (and iron skillet if using) to 450 degrees. Mix the almond flour, coconut flour, baking powder, baking soda, salt, and sweetener. Beat the egg and mix it with the sour cream, melted butter, cream, and water. Mix the wet ingredients into the dry ingredients using gentle strokes. Once the ingredients are completely mixed to a soft dough set aside.

Brush the hot skillet with butter or bacon grease. Scoop biscuits out onto the skillet. Return the skillet to the oven and bake for 12 to 15 minutes, or until golden. Remove from the oven and let cool for 10 minutes before eating.

Makes: 10 biscuits at around 6 carbs per biscuit

I have been MIA for a few months while I moved. It was a big move for us as we have moved to the Virgin Islands. I am very happy now to be back in a kitchen and cooking again.

Though there is not the fall weather here that I love, nor anything pumpkin spiced, I want to be able to enjoy it. I am not a person who wants everything to taste like pumpkin spice, but I do enjoy it in a coffee creamer. This creamer is simple and quick to prepare and tastes so delicious you won’t need a store-bought brand that has unwanted ingredients in it. Remember to adjust the amounts of each spice to your taste. Enjoy! 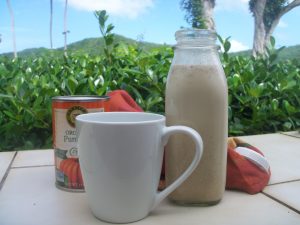 Bring the half and half to a low boil and whisk in the remaining ingredients. Continue to whisk for a minute or two for thickening. Cool and keep refrigerated for about a week or two. Shake before each use as some ingredients settle to the bottom.

Banana pudding made into cheesecake! Wow, these little bites are insanely good! I had chocolate graham crackers instead of vanilla wafers so I used them knowing I wouldn’t be disappointed. Either way you have a winner. A cream cheese banana filling with slices of banana added sit on top of a cookie crust and topped with a homemade whipped topping. Now try to only eat one! Enjoy! 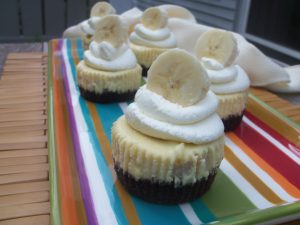 Preheat oven to 325 degrees. Add cupcake liners to a cupcake pan. Combine the vanilla wafer cookie crumbs, sugar and melted butter. Divide the mixture between the cupcake liners (about 2 tablespoons per cup) and press into the bottoms. Bake the crust for 5 minutes then remove from oven. Allow to cool while you make the filling.

To make the whipped cream, add the heavy whipping cream, powdered sugar and vanilla extract to a large mixer bowl. Whip on high-speed until stiff peaks form. Pipe a swirl of whipped cream on tip of each cheesecake and finish off with a banana slice and vanilla wafer. Refrigerate until ready to serve. Cheesecakes are best when well covered for 2-3 days.

I have fallen in love with peppadew peppers! I love the hint of heat with the sweetness of the pepper. There are so many delicious creamy fillings you can fill these little gems with. This one has just two ingredients, but the combination with the pepper just pops in your mouth. If your local grocery store has an olive bar, sometimes you can find peppadew peppers there and they will not be smashed in a jar and stand up better for presentation on your serving platters. Either way you and your guest will find these irresistible. Enjoy! 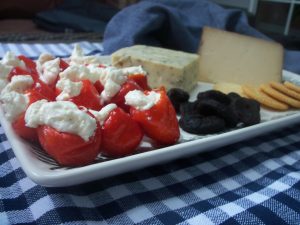 In the bottom of a food processor or blender combine feta and cream cheese. Process or blend until smooth, light and creamy. Season with pepper. Transfer filling to a ziplock bag. Snip the corner off of the bag and pipe filling into peppers.

These low-carb crackers are simple and easy to prepare, and taste great by themselves or with any delicious topping you choose. They have become a staple in my kitchen. I have found if you are using a stone baking sheet you do not need to use the parchment paper while baking, because the crackers will not turn golden brown. Enjoy! 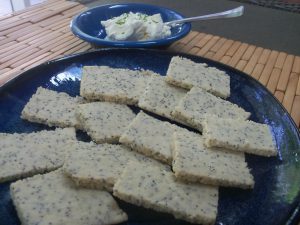